Otto Scharmer’s U Theory for reacting to the critical stages

Otto Scharmer‘s U Theory, also called the Theory of the leadership blind point, is a useful starting point for reflecting on the ways in which companies, and organisations in general, react in moments of crisis. When a corporate organisation goes into crisis, common sense should activate a change in strategies, behaviour, organisational processes and leadership styles however, on the contrary we often see an attempt to resolve the problems using the same ideas that created them. Why does this happen? Otto Scharmer, a professor at MIT in Boston and founder of the Presencing Institute, says that until now, leadership and management have been widely studied at the level of product and process, but much less at the level of deep motivation. He uses an artist as an example we know a lot about the painting (the product) and the painting techniques (process) but we don’t know much about what happens just before facing the blank canvas, about what drives the artist to paint a landscape rather than a portrait or an abstract, a miniature rather than a large fresco. Scharmer’s U Theory analyses reality in depth, trying to reach a blind point by overturning the usual process with which one starts from the past to create a future which is similar to that past. The process of analysis and research digs deep, getting rid of the shackles of the past and of habits, of consolidated ideas and prejudices, until we find true self-consciousness in the blind point, from which we get the strength to go back up, attracted by a future that is different from everything we have left behind in the past. The U model is used not only in coaching, in organisational consultancy, and in team building but also at an individual level. As Scharmer says, this is nothing new but it is only the reorganisation of pre-existing ideas, from Zen to deep psychology, from strategic problem solving to different intelligences and the tools of creativity and overall quality. 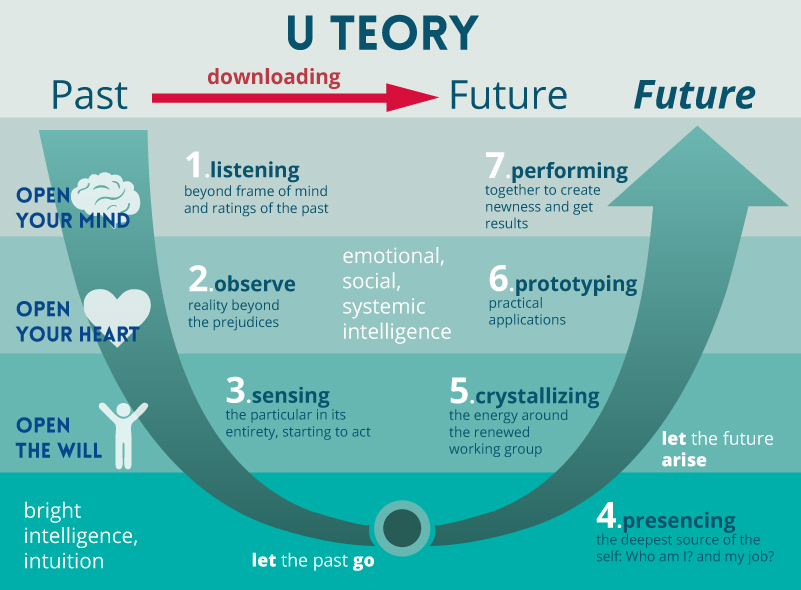 The graph that summarises this theory shows how the red arrow, which goes from the past towards the future, reaches a future that is similar to the past, thus preventing us from arriving in a new, different future. This is attainable only by freeing ourselves from consolidated habits, descending deep inside ourselves towards the blind point and then going back up towards a truly new future, which calls us and pulls us towards it. Scharmer calls routine attitudes downloading, meaning that we download acquired knowledge, past experiences, preconceived ideas, even clichés, and we only listen to those who think like us, without carrying out any original, critical analysis. It is the past that pretends to project itself in a tomorrow in which it assumes that everything will continue as before. In order to reach a true future of change, in which current problems and new problems need new solutions, we must leave the convenient superficial highway and descend below, with a process of diving and resurfacing which has a typical U shape. The journey through the U is carried out with the development of seven essential leadership skills.

The Presence Institute is the community of theory and training to which the U Theory refers. The U Theory drives people and organisations to move towards an emerging future. Umberto Santucci www.umbertosantucci.it

What are the Constraints and Incentives for a Learning Organisation? Part II

What is exactly is a “learning organisation”? It is a much-debated term, but one that is notoriously hard to pin down.

Our Place – Our future continues here –

A successful sales network: how to create it in 4 steps